The year begins with a set of chess pieces, lined up and awaiting orders. January is full of strategic considerations, for it is here that we decide upon our opening gambit. Beginnings are unique – they offer a freedom that no other phase does. Once we make our moves and the world responds, we will inevitably be caught up in the limited tactical trance of the middlegame, our horizons and options narrowed. It is thus important to take full advantage of the relative freedom to think and formulate what beginnings provide.

Although January as the first calendar month is always concerned with beginnings, it is particularly so this year, as the month’s primary configurations hinge upon the tension between planets in cardinal signs, signs responsible for initiating action and beginning stories.

This cardinal action results from a trio of aspects between Jupiter in Libra, Uranus in Aries and Pluto in Capricorn. These three planets form a loose t-square for the entirety of the month. Their dynamic is energized by the Sun and Mercury’s passage through Capricorn and brought to a peak by the Full Moon in Cancer, which turns the t-square into a proper grand cross.

In the tropical zodiac, cardinal signs occur at the beginning of seasons, and thus oversee their first act. They are introductions, opening gambits, early plot developments. Each of the cardinal signs signifies a different approach to beginnings, and each initiates a different type of story.

Capricorn, where Pluto resides, begins carefully, with planning. It is the way an architect begins, first by drawing up detailed plans and then assembling materials. It speaks to stories which remake the world. As a game strategy, it is to control the territory of the board.

Aries, where Uranus dwells, begins with action. Inspiration and passion turn potential into kinetic energy. Aries begins stories which remake the self. As a strategy within a game, it is offensive, and prioritizes the rapid elimination of obstacles and opponents.

Libra, on the other hand, begins by looking to the Other. Understanding a situation from multiple perspectives is crucial for initiating stories which remake relationships. In a game, the Libran strategy is to wait and bait the opponent into action, and to capitalize on the opportunities thereby created.

The fourth and final cardinal sign, Cancer, where we will see the Full Moon this month, begins with fortification and has a mind to protect what one already possesses. Its stories deepen roots and nurture strength. As a strategy, it prioritizes protection and puts into motion a turtling offense.

Squares and oppositions between cardinal signs, such as we have this month, describe difficulty in knowing how to begin. There is a tug this January between different strategies and different priorities. Though the gambit you open with may end up being a simple one, the process by which you arrive at it may not be. Give yourself the time to consider the complexity of the board before you make your first move.

Venus enters Pisces early Tuesday morning, January 3rd. Venus is powerful in Pisces, the sign of her exaltation. Pleasure and relief are easier to find and conflicts are more easily dissolved or ignored. Venus in Pisces is also particularly favorable for poetry and music. Venus will be in the Fishes’ sign for the remainder of January, with plans to occupy Pisces until February 3rd.

Shortly after Venus’ ingress, the bright planet completes a sextile with retrograde Mercury in Capricorn, pulling thoughts and communications towards matters of relationship, pleasure and art. This is a good configuration for figuring how to translate complex feelings into appropriate words.

Immediately after Venus and Mercury complete their sextile, Mercury backs out of Capricorn, returning to Sagittarius on the 4th in preparation for his direct station on the 8th. In Sagittarius, Mercury encourages more positive mental states, highlighting what can be achieved instead of dwelling on what can’t.

Echoes From The Deeps

Venus’ time in Pisces is complicated by a conjunction with the South Node of the Moon, also called Ketu, or the Dragon’s Tail. The South Node’s nature is to purge those planets which it coincides with. This purgation of the past is at odds with some of Venus’ more social significations, as processing psychic toxins tends to be a more solitary affair. Venus conjoins the South Node on the 7th, though the effects may be felt during the surrounding days.

This looking deep and looking back is further attested to by the Sun’s conjunction with Pluto, which occurs on the 6th, at 17 Capricorn. There thus a cavernous depth which haunts the nearby days, a chamber in which echoes from both the past and the future can be heard.

It is in this sanctum, carved by the Sun’s conjunction to Pluto and decorated by Venus’ conjunction with the Dragon’s Tail, that Mercury stations direct. Mercury’s retrograde, which began on December 19th, comes to an end early on January 8th, at 28 Sagittarius. The messenger emerges from the underworld holding a flaming arrow, and uses it to point the way forward, into a year of firewalks, decathlons and adventures.

The Sun in Capricorn moves from a conjunction with Pluto to t-squaring one of 2017’s most dynamic, exciting and destabilizing configurations – the Jupiter-Uranus opposition. The Sun in Capricorn makes this t-square with the Jupiter-Uranus opposition between the 10th and 11th, running perpendicular to the tug-of-war between the two distant planets. The Full Moon joins the discussion on the 11th and 12th, turning the t-square into a proper grand cross configuration.

Because they bind contrary energies, grand crosses tend to complicate the days surrounding them, making a temporary tangle of matters. With all 4 cardinal signs – Aries, Libra, Cancer and Capricorn – occupied, there is a tremendous amount of contrary initiatory energy. Individuals may find themselves pulled in opposing directions, having a hard time knowing which big project to start, trying to do too much at once, or paralyzed by an overabundance of conflicting possibilities.

Though other planets complicate the situation, it is still the Full Moon in Cancer, which occurs near the beginning of every calendar year, which asks us to decide what seeds we will incubate, nurture and protect over the coming year. Though this decision may be more complicated in 2017, the question remains the same. If it takes some extra time to decide which outcomes to incubate, then so be it.

Though the days leading up to and following the Full Moon may host a complex swirl of contradictory energies, it should be noted that the heavens provide a slight counterweight. While the Sun, Moon, Pluto, Jupiter and Uranus engage in complex negotiations, Venus makes a soothing conjunction with Neptune in Pisces, which helps mitigate some of the ambient tension.

Though the Full Moon and the accompanying planetary tangles fade away over the ensuing days, the cross which marked the lunation is imprinted on the following fortnight, suggesting that it may take a few weeks to fully unwrap this Full Moon’s complicated gift.

The days following the Full Moon do not significantly alter the month’s dynamic. Yet as we approach the second half of the month, Mars in Pisces closes in on a potentially frustrating square with Saturn in Sagittarius. The Mars-Saturn square asks for both industry and patience in the face of delays and irritations. Though it is not exact until the 19th, its dynamics will likely be clear from the 16th onward.

The Sun Enters Aquarius: The Possible and the Probable

The Sun’s entrance into Aquarius on the 19th begins the second section of the month. While the Sun in Capricorn illuminated the harsh slopes of the-way-things-are, the Sun in Aquarius’ light pierces the veil of the present, revealing a mathematical tangle of probability and possibility. Though the Sun in Aquarius does not change the game, it offers a novel angle January’s dynamics. This contemplative orientation will persist until February 18th, when the Sun enters Pisces.

A little more than a week after the Sun’s entrance in Aquarius, on January 27th, comes the New Moon, which occurs at 8 Aquarius. Unlike the Full Moon which preceded it, this is one of the least dramatic lunations of the quarter, and it seeds a relatively contemplative fortnight, during which we might stand back from the nascent plot arcs and observe their direction and velocity.

Mars sneaks into Aries just hours after the New Moon. Though it will take the red planet until the second half of February to heat things up, it most certainly will. Mars is potent in Aries, and generous with the petrol. During the 5 weeks that Mars is in Aries, temperatures will be raised, frictions intensified, work accomplished and heroics inspired. Mars enters Aries on the 27th, but it will be the Moon’s conjunction with the red planet on the 31st which will serve as its formal introduction.

The last days of the month see Mercury work its way through the t-square between Jupiter, Uranus and Pluto which featured so dramatically in mid-January’s Full Moon. Mercury’s engagement with this configuration asks us to take another look at the dynamics of our year’s complicated beginning. Consider the moves you’ve made so far, make the necessary adjustments, and set course for February, whose eclipse-bearing skies are stocked with significant omens. 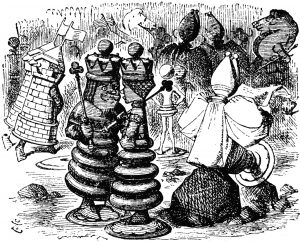 ... Fans & Followers
Like
... Connections
Follow
▲ 559
... Subscribers
Subscribe
... Fans Love us
X
The Astrology of 2017: Ante UpArticlesThe skies of 2017 shine bright and gaudy as a Vegas casino, and house just as many games of skill and chance.  The year deals a thick deck of cards, e…

3
X
Astrology 1/16-1/22: The Blessing of Relentlessness…ArticlesThe week begins with friction between Mars in Pisces and Saturn in Sagittarius, the two on their way to completing a square, a perfect 90 degree angle…
Thanks for sharing! Would you like to connect with Austin on Facebook or Twitter?
Follow @AustinRCoppock
Send this to a friend