The Sun enters the final decan of Pisces on the 10th, and rises there, for the first time this year, on the 11th. A week later, on March 17th, the New Moon occurs in this decan, pinning the next fortnight to the decan’s themes. Only hours after the New Moon, red Mars joins Saturn and Pluto in Capricorn, beginning a pair of months where the going gets tough, and the tough get going. This span of days is pivotal, as it wraps up our time in oceanic Pisces and introduces the martial themes which will characterize the coming months. At the end of the last face of Pisces lies the equinox, which will usher us into a season yet to be discovered.

The Engine of Survival

The last third of Pisces is a place of both dreams come true and boundless dissatisfactions. The heart’s fondest wish dwells here, as does the price we are willing to pay for it — the life’s blood we offer in return. It forces the question — what is worth bleeding for? At the end of the day, when the credits are about to roll, the answer has always been, and will always be: Love. It does not matter what particular flavor of love it is, nor whether that love found in a single person, all sentient beings, or in the pure joy of a particular activity. Love is what is worth dying for, and therefore worth living for. As Leonard Cohen put it, “Love’s the only engine of survival.”

It is fundamental enough to be present at the beginning in the cosmogenesis of various systems. Why did the One become Two? In order to experience Love. As Crowley wrote in the Book of the Law, “I am divided for love’s sake, for the chance of union.” Love requires division between the known and unknown, self and other, heaven and earth, mundane and mysterious.

It is here, in the last decan of Pisces, generally held to be the very end of the zodiac, that the two fish spiral back to their origin point — the One that divided itself for the sake of Love.

Yet things get lost on their way into manifestation. The love which begins a romance gets buried, lost, obscured. The passion which once inspired the divine artist fades, and the art itself becomes rote and mechanical.

We must return to this mysterious source from time to time and sip its rejuvenative waters. For only love can justify suffering.

Yet the source is obscure, and trapped in the mythical past. There are not only temporal barriers, but metaphysical ones, which separate us from it.

The process of return, the grail quest, is therefore an odd one, for we often do not know where to begin. When our love is insufficient to justify life, we wander aimlessly, carrying with us an objectless dissatisfaction. As in Hamlet’s doleful monologue, “How weary, stale, flat, and unprofitable seem to me all the uses of this world!” All of the worlds’ horrors become unbearable when there is no reason to bear them. Every story seems to end in tragedy. This is the 10 of Cups inverted, the Unhappy Ending. Yet when we remember our love, the card is turned right side up, and the happy Hollywood ending suddenly seems not only possible, but inevitable, simply because it was all worth it.

We are constantly misplacing our love, giving it to the wrong people, attaching it to fleeting situations, refusing to feel it except under specific conditions. Love is not a product of those situations or people. They are the window through which we see the rainbow. Yet in order to recover it, to remember it, we must work backwards, through the times and faces.

The ork is an alchemical act of separation, sifting love itself from all names and conditions. They are the plumbing, not the water. Returning to the ocean, you can begin the water cycle again, from the beginning. Let it evaporate into clouds, then fall as fresh rain, to be absorbed by the earth and become part of living bodies. The end is preparation for the beginning. The last sign of the zodiac is the ocean from which the first emerges.

A Hierarchy of Madness

From this boundless, irrational love proceeds one of your most potent assets, your “good crazy.” Good crazy is your willingness to chase a dream down, despite what everybody, including the statistics, say. Angry may get shit done, but it can’t hold a candle to good crazy. Good crazy hails from the majestic, turbulent realm of the soul, does not give a fuck, and cannot be stopped.

The thing is, you don’t pick your good crazy. You discover it. Everyone gets some, but it’s not something you construct or create. It’s something you receive and accept. Good crazy is a result of surrender to something bigger, deeper and truer than the conscious personality.

Unfortunately, it is easy to confuse with bad crazy. There’s a lot of bad crazy out there, and it is easily transmissible. So how do you tell the good crazy from the bad? Love. Good crazy always has, at it’s core, an ecstatic embrace. It’s wiling to pursue its Beatrice through the Inferno and back because it loves, and loves hard. It wants to give, and give everything. Bad crazy, which is most crazy, is fundamentally about aversion. It hates this. It drowns itself in pleasure to avoid that. Its root is always negation.

Just as the varieties of socially transmissible madnesses out there are often treated as normal or even desirable, good crazy often gets a bad name. Even if you find it within, don’t expect everybody to praise and honor it. That’s for you to do.

Only hours after the New Moon in Pisces on the 17th, Mars enters Capricorn. In the goat’s sign, the red planet gains a chthonic, magmic power, and possesses a ruthless and strategic disposition. If Mars were alone in Capricorn, we might consider its presence there a blessing, but this year Mars joins both Saturn and Pluto. As I wrote in “The Astrology of 2018: The Lay of the Land:”

In traditional astrology, Mars and Saturn are the two “malefics,” meaning that they preside over various forms of difficulty, impediment and adversity. Mars is the hot malefic, and rules over adrenalized crisis moments, and Saturn is the cold malefic, and speaks to the challenges of deprivation and ordeals of endurance. The two planets are not considered to be terribly friendly with one another, though they can both agree on giving the human a hard time.

The periods where they share the same sign (“copresence”) sees them join their power, often generating extremely difficult or unpleasant situations and states.

Some notable difficulties will certainly befall individuals and peoples during this period. Yet it is not wholly negative, nor without value. Mars and Saturn together support fierce, powerful action, and there are projects which require this sort of merciless intensity. This period of co-presence, if approached correctly, presents us with an opportunity to dedicate ourselves to the accomplishment of outrageously difficult tasks. Mars-Saturn-Pluto together generate a destructive power, but if that potency is pointed in the right direction, it can accomplish great things. The net result of negating a negative is positive. An obstacle destroyed leaves behind a clear pathway.

With Mars’ entrance into Capricorn, we enter 2-months of Mars-Saturn co-presence. Not only that, but only a few days later, on the 19th, Mercury and Venus conjoin in Mars-ruled Aries, less than a week before Mercury’s retrograde station. This conjunction signals the shift we need to make as we move from The End of oceanic Pisces to The Beginning of martial Aries.

And so after our bath in the waters of primordial love, we must dry off and suit up. Get to the mech-bay, climb into our mighty exoskeletons and grasp our power-tools, as there is work to be done and hazardous environments to traverse. Remember though that the forbidding outside is to protect the tenderness inside. This is the duality we must straddle — to become harsh without forgetting how to become gentle again. This loud, heavy, industrial strength configuration makes the remembrance and recovery of love all the more important. Tough situations require more love to redeem them. This the lesson of the two fish. They are never separate except for when they dream they are. 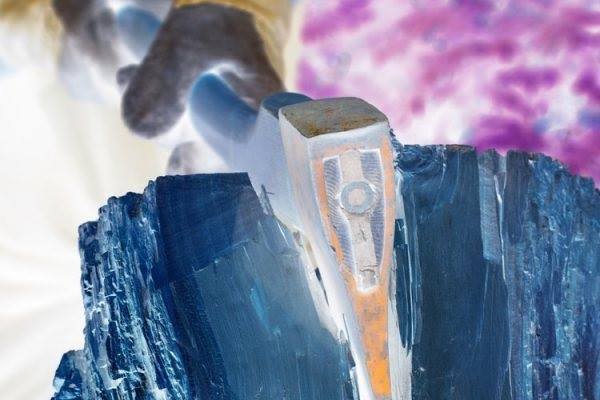