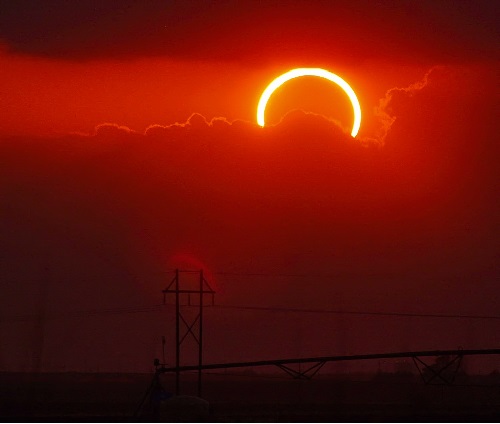 An annular solar eclipse occurs on Thursday, May 9th, visible primarily over Australia and the Pacific.  This eclipse occurs atop the south node of the Moon, the old Tail of the Dragon, Ketu to Vedic astrologers.  I did a little writing about this eclipse my 2013 Almanac.  It went something like this-

physical body, it is merely a point  determined by the intersection of the Sun, Moon and Earth’s revolutions which has been calculated for thousands of years to predict eclipses.  Yet this intersection has a life of its own, and the power to devour the Sun and Moon.  Ketu, as it is called in India, is often imagined as a headless, serpentine figure, half of a primordial dragon.  Yet only a fool would think this horror a demon, for Ketu has a vital role to play.  He detaches mind from matter.  Without this function, our identifications and attachments would only grow unchecked, degrading the pristine state of mind to that of a metastisizing tumor.  No matter how vital his function, though, few welcome headless Ketu into their lives, for the eclipses which he heralds threaten our most entrenched attachments.

Ketu spends this year in Taurus, lying in wait for the quarter of planets moving through it.  Normally a natural time for indulgence, this year there is, courtesy of Ketu, a subtle but insistent pull towards asceticism.  Desires, spurred to furious levels by the co-presence of both Mars and Venus in the lustful sign, are denied rather than sated.  Or, if sated, come with unforeseen and unwanted consequences.  Here Ketu targets those things we have saddled ourselves with in order to feel stable, secure.  By holding on to these things we fix our position, reducing our mobility and adaptability.  Yet mobility, adaptability and fluidity is exactly what this year demands.  Saturn in Scorpio whispers that we are in a transition from one stable state into another, yet we are within neither.   We’ve got to keep moving.

The Solar Eclipse in Taurus on May 9th places these themes in the foreground, offering us a hole in sky in which to cast what we cannot take with us on journey.  In addition to this, the Sun, Mercury, Venus and Mars must all conjoin Ketu individually, each purged, each offering a sacrifice.  Yet the sacrifice is often only the illusion of control.  Once one has let go of the attachment to something, be it a person, an object or a swath of land, the natural course of things is restored and the wheel of karma, unstuck, turns again.”

The black rays of the eclipse beat down the writer as well as the reader, and I have a small sacrifice to make, myself.  As my more regular readers may have noted, I’ve been pretty slack about posting my weekly column over the last few months. I’ve taken on obligations and projects over the last year which have left me without the time and energy to create the kind of columns I like to write.  I saw this coming in the November, when the first eclipse in Scorpio occurred, but I thought I could just muscle through it.  Turns out muscles have their limits.  Now, on the eve of the second solar  eclipse in this cycle, it’s become clear to me that I need to let it go.

As much as I don’t want to say it- I won’t be writing a weekly column any more.  At least not for a while.

That’s my sacrifice.  The thing I can’t take with me.   I’ve written a column nearly every week since mid 2005 and it’s a place I’ve come to feel comfortable and confident, secure and appreciated.  However, like most things that make us feel safe, it’s also tied me down, bound my energy and time into a particular form.  And that’s exactly what this cycle of eclipses is hunting.

Things are changing, for myself as well as the world.  As much as I like narrating each week, there are other things I’d like to talk about, and the commitment to a weekly column hasn’t left room for them.  Again, that’s the theme for these eclipses-  unbinding your energy, liberating it from one form so that it is free to invigorate others.  It’s the Solve of alchemy, the process of separating spirit from matter, that spirit might animate a new body.  Some folks might call that dying, but I digress.  In alchemy, the separation generally takes place two ways.  The first is through the process of putrefaction, or, in common parlance- rotting.  This is the wet way, the slow way.  The second is called calcination, and it’s hotter, and faster.  You toss the matter into the furnace and burn it to a fine white ash.  Cremation.  As much as I don’t like to admit it, my weekly work has been rotting for a while.  I’ve missing weeks and have spent more time feeling guilty than a person needs to.  So in order to keep the flies away, I’m tossing it into the fire, a burnt offering to the way things need to be.

For those who’ve read my column for years now, I apologize.  I feel like I owe you, even though that’s crazy.  But I’m not going silent, merely changing things up.  I’ll still be writing.  Actually, I’ll be writing considerably more.  I’ve already committed to another yearly Almanac, a huge book on the decans for Three Hands Press, articles for CLAVIS and the Mountain Astrologer, some screenwriting and a few other things, as well.  I also plan to continue to blog about the astrology as it unfolds- just not in the form of a weekly column. .

For those who’ve made it this far into my soliloquy, I thank you for your patience.   In addition to explaining the programming change, I hoped that a little transparency about my small sacrifice might shed a little light on the nature of the eclipse cycle we’re experiencing.   What is it that you can’t take with you?  Is there some old attachment rotting in a dark corner of your mind, something perhaps better served by a quick cremation? 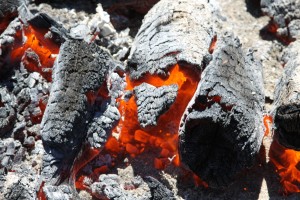