“ Where are you?  Well, you shot straight down rivers of emotion and streams of thought.  You’re here now, in the estuary of dreams.

Stick with the current and before you know, it you’ll hit the mind-sea.   That’s where the Buddha whales live.  Big ole psychic things the size of cruise ships, you can’t get within 100 miles of ‘em without them getting inside your head.  The waves start singing and before you know it- you’re half drowned and seeing mandalas crawling all over the reefs.  Then you black out and wake up washed ashore, telling your mates all about the sorta things they’ll never believe.  Til it happens to them, ‘course.

Once you pop out of the range of one of the Buddha whales, you’re in deep, as far from land as anyone ever needs to be.  Just pray its nothing more than the natural fury of the mindsea you encounter.  Cuz there’s more that lives out there.  Huge, dark things beneath the surface.  You won’t even see that much, though.  Before you’re close enough to see that kind of shadow, it’s your mind that’ll go overboard, plunging into the deeps like it was wrapped around an anchor.  It’ll start easy, like you see some pretty mermaid waving to you, but then it’ll get real dark real fast. There’s blood in those deep waters, mate-  that’s all I can say.

Now, sometimes the two kinds’ll get within range of each other- the Buddha whales and them other things.  You want to steer as far clear of that as possible.  It’s the kinda thing that can’t exactly sneak up on you, though- it brews up the kind of storm that’ll tear the hair out of your head.  They say if you die in one of those storms, its a sure ticket to incarnation on the physical plane.  As I said, steer clear.

Anyway, when you’re not being pulled into some weird maelstrom or singin hymns with the whales, the mind-sea is a pretty goddamn interesting place.  You lean off the side of yer rig, gaze into them waters, and you’ll see reflected the apple of your mind’s eye.  Look for a while and you can learn pretty much anything about anything.  It’s the ‘verse’s largest scrying mirror.

Now, most folks round here ain’t from here.  Seein as how I’ never seen a birth, that don’t surprise me a whole hell of a lot.  When folks get to the Estuary, they get real confused, and most don’t stay for more than half a night at a time.  But we get some return visitors, and some folks end up spending more time here than where-ever it was they come from.

The ones that stay eventually ship out- either that or they get shanghaied.  Some of ships just chase the damn whales around, blissed out of their minds.  It always starts out as some sort of  sightseeing, but it always ends up something else.  When folks get close to the whales, they get crazy- the waves start whispering with the voices of the ancestors, the winds start talking, and the clouds start arranging themselves into geometrical patterns.  They can’t take it, and the plan always turns into some weird suicide mission.  Whole crews decide they want nothing more than to get swallowed whole.   I’ve heard of ships sailing directly into those great mouths.  Even knowin that, people still do it.  A ship just left yesterday, fulla folks.

More and more these days, though, we see the whaling crews.  First one was run by a Cap’n named Melville.  Went nuts trying to hunt down the white whale Vairocana.  Like that was going to happen!  I only ever seen a single carcass hauled back in, and that one wasn’t in very good shape.  Cap’n Nietzsche admitted to me, drunk one night, that the thing was dead when he found it.  Oh! The stink on that fish.  Its been most of a century since it got hauled in, and there’s still a good sized chunk of it left.  There are a bunch a folks that come here on the regular to a visit it- they got some macabre church set up in inside it.  A real cathedral of bones.  They’re nice enough when they’re not acting crazy, but they smell like a a bait fish left out in the sun.

Then there’s the curious ones.  The REAL curious ones.  They ship out to the deep mind-sea, trying to get a look at what them damn shadows actually are.  They go decked out with all types of gear- battleships, research vessels, fishing boats- you name it.  Sometimes they come back with little monsters, but mostly they just don’t come back.  Some say that got a base out there, a floating island made of a sea monster’s bones, a buccaneer’s den fulla weirdos.

Anyway, there’s a lot to see, and I ain’t got all day.  Ship’s leavin at noon, and if you want on, we could use the help.  The pay is fair and the food is terrible, but there’s nothing else like it.” 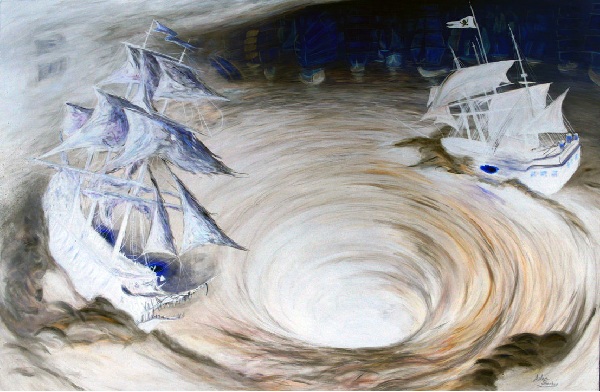