The last 3 weeks have been characterized by a rough configuration- the Cardinal T-square (see Love Triangle and Square Dance for more details).  The height of the tension began when Mars entered Libra on July 29th, further intensifying the difficult-to-digest blend of energies.  And we’ve been doing the square-dance ever since.

Cinderella and the Rake

But now as Venus in Libra departs from the T-square, we enter a new phase.  The lady in white sets her sights on Mars in Libra, and the two walk hand and hand through the night sky for the 2 months,  all the way through Libra and into the depths of Scorpio.  The two will split up in early October when Venus turns retrograde and Mars continues along his merry way through the sewer tunnels of the fixed water sign.

Venus, Mars and Saturn in Libra highlights the importance of meeting the right people and having the right interaction with them.  All Venus Mars conjunctions shine an important light on romantic relationships, but with Saturn present in the same sign, this roving conjunction will also clinch a number of business deals.   For a bit more archetypal depth on the ongoing tryst between Mars and Venus, check out Red Light, Green Light.

Uranus retreats from Aries this coming weekend, further loosening the T-square’s death grip on us.  Uranus’ movement back into Pisces helps diffuse some of the more volatile energies afoot.  In practice, the urgent need to change things will diffuse into a more sedate and patient impulse.  A bit of zen regarding radical life changes.  Uranus will retrograde for several more months, but has plans to return to Aries in March of 2011.  After that it will be the Ram’s rough terrain that the electric planet will reside within until 2018. 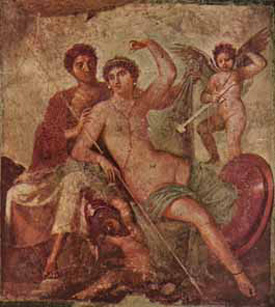 And so as  the T-square looses steam and Venus moves to join Mars, we’ll see the tension transforming into magnetism. However, Mercury is busy plotting another retrograde, and although he won’t actually turn the tables until August 20th, he’ll be busy complicating conversations that should be moving smoothly, and hiding the fine print on contracts of all varieties.

With Uranus’ retreat from Aries, your budding super-powers go back into dormancy, and the insane certitude you may have felt over the last couple months returns to an average level of madness.  You’re going from being an agent of change to being subject to change, as Uranus goes back to tinkering around in your deep unconscious.  There are few internal demons left to make peace with before you can be the ball of explodey you’ve been feeling like.

Venus and Mars’ roving conjunction in Libra provides a workshop for you to work on your interpersonal skills, as well as the ability by creating harmony between the people involved.

Uranus’ re-entry into Pisces tones down the internal tension for you.  The need for change relocates itself from your sense of personal power back to the social networks you belong to.

Venus’ and Mars’ mobile conjunction in Libra magnetizes your love life and charges your creativity, as well.

Uranus retreats back into Pisces this week, shining its mutating rays back on your professional life.  Important changes here are scheduled for the beginning and end of this Fall.

Venus and Mars’ movement through Libra will charge your social life and mark your living space as the place to be.

Uranus leaves Aries this week, leaving the need for professional change behind temporarily.  In Pisces, Uranus will get back to the business of triggering sudden mutations in your worldview and physical location.  The focal dates for these changes are the middle of  September and early January.

Venus and Mars’ movement through Libra turns up the volume of the people passing through your life.  There may be an important connection to make, so work the crowd.

Uranus leaves Aries this week, retreating back into Pisces.   Excitement surrounding changes to your worldview and physical location are replaced by serious fluctuations in the resources you have to draw on.   There are important changes still pending in these areas, scheduled for the middle of September and then again in early January.

Venus and Mars movement through Libra may see a few dollars flow through your greedy clutches.  If your profession involves convincing people to give you money,  be it tips or start-up capital, this is a nice configuration to tap.

Uranus leaves Aries this week, retreating back into Pisces.  You can look forward to a final series of changes in your personal relationships.  Look to mid-September and early January for the key dates of those mutations.

Venus and Mars’ movement through Libra supercharges the social side of your nature.  Consider your charisma +3 for the next month.

Uranus leaves Aries this week, retreating back into Pisces.   The instability in personal relationships that likely characterized the summer evaporates with a return to the need to change your habits.  You may be challenged to adapt to an unstable work situation as well.  Look to mid-September and early January for changes in these areas.

Venus and Mars’ movement through Libra highlights all the fun you’ve forgotten to have.  Go have it.

Uranus leaves Aries this week, retreating back into Pisces.  The desire to change your habits for the better retreats into a need to change your lifestyle, and more than that, rethink what you do with your creative energy.

Venus and Mars’ movement through Libra highlights networks of friends and acquaintances.  There may well be some important connections during this period.   Go out, meet and greet, just remember to come away with something more than a good time.

Uranus leaves Aries this week, retreating back into Pisces.  The summer instability in your love life and lifestyle fades away, to be replaced by geographical instability.  A change or two in your living space is more than likely over the 6 months.  Look to mid-September and early January for the peak of these mutations.

Uranus leaves Aries this week, retreating back into Pisces.  The summer instability that’s surrounded your living space evaporates, to be replaced by a number of changes to the social circles  you find yourself wading through.  Look forward to meeting a few good men (and women) over the next 6 months, especially around mid September and in early January.

Venus and Mars’ movement through Libra highlights long range travel, systems of ideas and spiritual knowledge.  You’ll find yourself magnetized to what is just over the horizon, as well as able to magnetize other people to the same.

Uranus leaves Aries this week, retreating back into Pisces.  The Summer changes to your social circle and in your relationship to your siblings becomes a set of changes to the influx and outflow of cash.  Look to mid-september and early January for the most important changes in the situation.

Venus and Mars’ movement through Libra highlights the energetic exchanges within your partnerships.   This includes both social interactions that nail together group projects and that conjoin bank accounts.

Uranus leaves Aries this week, retreating back into Pisces.  The financial instability you likely encountered this summer evaporates, becoming a series of changes in how you see yourself and your fundamental pattern of interaction with the world.

Sol in Leo, Luna in Virgo