In Greek myth, a distinction is made between two forms of Aphrodite/Venus. One is Aphrodite Ourania, the “celestial” Aphrodite, who represents love as a universal principle. The other is Aphrodite Pandemos, the Aphrodite of all people, who symbolizes affection and connection on the human level experienced daily. Not only divergent in sphere of rulership, the two sides of Aphrodite are given to different sets of parents. Aphrodite Ourania was said to be born from Ouranos’ (Uranus) castration by Kronus (Saturn), while Aphrodite Pandemos was born of a tryst between Zeus and the Titan Dione.

According to this divergent geneology, Aphrodite Ourania is Zeus’ crazy aunt, while Aphrodite Pandemos is Zeus’ daughter. Age in mythology describes the principles represented by the deity in question. The Titans, some of the oldest creatures in Greek myth, represent the raw, uncontrolled power of reality’ building blocks. Earth, Sky, Time, Love, etc. The Olympians, on the other hand, represent the civilized and socialized form of these forces.

Aphrodite Ourania’s age suggests that she is a fundamental force, titanic in origin and scope. Venus/Aphrodite represents the connective principle, the temporary reconciliation of opposites in moments of affection. The Celestial Aphrodite represents this principle on a universal level. She is the great queen of heaven, who keeps the divergent forces of the unverse from tearing it apart. She creates love between electrons and protons by providing the neutron, she is the element in the heart of man that chains devils and angels to one another.In Kabbalistic terms, she is the symbol of Venus created by the entire Tree of Life- the reconciling principle that holds the entire structure together.

Aphrodite Pandemos, on the other hand, represents human experiences of affection and reconciliation. She is the celestial principle applied to very human, obvious situations. Where Aphrodite Ourania’s action is veiled, Aphrodite Pandemos’ effect is plain for all to see and experience. She is not the hidden emblem of Venus that it takes the entire Tree of Life to create, but is simply Netzach, the lowly sephiroth near the bottom of the chain of manifestation. Human and animal affection, attraction and reconciliation. But the blood of her great aunt flows through her veins, and her simple acts of friendship and sensuality are the doorway to universal dynamics. 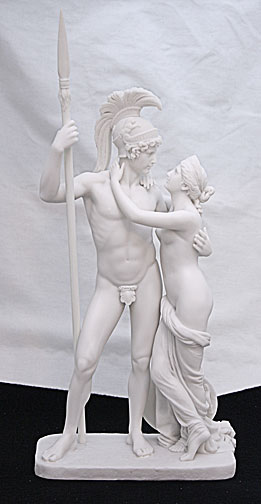 The brash god of war represents the principle of separation and conflict. As is fitting for a god of conflict, he was disliked and ostracized by the other members of his pantheon. In fact, Aphrodite was the only Olympian who could stand Ares. Well, she did more than stand him. They had a gaggle of bastard children together.

This rather abstract envisioning of the Fall describes the situation of the Greek Ares/Roman Mars quite eloquently. The God of War is separated from and ostracized from this brothers, sisters and parents. The only reconciliation he found was with Aphrodite. She broke her marital vow to Haepheastus in order to conduct an ongoing affair with him (interesting, as according to Aphrodite’s more ancient genealogical scheme, she predates Hera, the goddess of marital contracts).

Here, Aphrodite as the reconciler echoes the tales Vedic sages and astrologers tell of Venus. They speak of Shukra. They envision Venus as male, but his role as reconciler is unchanged. One of Shukra’s most interesting roles is as the Daitya Guru, roughly, the “demon teacher.” He alone, of all saintly choir of gods, was able to reach out to the asura, the daitya, the rakshasa- the “demonic” spirits of the Vedic megapantheon. Although the world of Greek mythology does not have a clearly defined angel/demon polarity, it is no stretch to place blood-soaked Ares there. 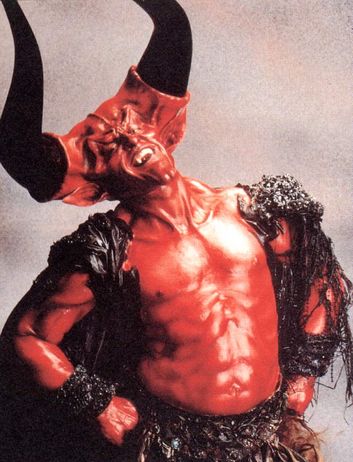 Within Greek Myth, a higher, more fundamental form of Venus/Aphrodite is recognized: Aphrodite Ourania- the love between every particle that holds the world together. However, within the Hellenic framework, there is no Ares Ourania. The warrior who cuts the one into two is not honored by expanding his principle to a universal level, for it is a dangerous one. It is the principle of separation, of independence and individualization. It seeks a multiplicity of forms, and desires bloody competition between them all. This principle must always have one foot in the shadow of a society’s mythology because the organism of civilization is vulnerable to excessive individualization. The efforts and energies of the many are organized to create civilization’s great works. Too much individuality breaks apart the unity that a culture’s stories work to maintain. Even a martial civilization must extol connective virtues of honor and loyalty in order to prevent the energy of separation from dissolving it. Mars’ deepest resonance cannot be given its due, for to do so threatens the fabric of civilization.

One of the better approximations of Mars Ourania, “big Mars,” as suggested by alternate Kabbalistic stories of creation is the Western Satan. He is the fiery spirit that does not honor the whole. He would rather rule in hell than serve in heaven. He is the eternal antagonist in the ongoing battle within Christian theology. The West, however, has no Aphrodite to calm and reconnect him. There is no Queen of Heaven, no dancing honey-lipped Oshun or reconciling Shukra to draw this one back to fold. The Kabbalistic story of the Fall where Geburah/Mars separates from the whole and becomes the devil is part of the deep mythic history of the Western psyche, whether the story is told that way or not. With totalitarian pro life angels running the great and secret show, life must be preserved at any cost, and even a hint of bloodshed must be rationalized and justified out of existence. Here the universal Mars principle is forced to masquerade as the Devil.

The ongoing intercourse of Aphrodite Ourania and the “big Mars” is the principle at work behind the next few months. This roving union of Mars and Venus casts deep Tantric shadows. Not all stories of creation involve a Fall into ruin. Only those that make the error of assuming a perfect god. The tantric creation myth is simple sex. Perfection split into two and in order to fuck itself.

The existing world is constantly generated by the primordial fucking of the God and Goddess. It does not have a reason any more than sex has a reason. We do not do it to make babies. We procreate accidentally as a result of the single activity which needs no justification. And that, my friends, is why you will not find the reason it all went wrong, and you will not be able to fix it. Existence is the sexual tension between perfection and imperfection, connection and separation. And if it was resolved, the show would be over. It is the dance of the Two. And when the One cannot be spoken of, a vision of the tension between the Two is the surest route to understanding.

What springs from the union of Mars and Venus? This affair, though illicit, was far more fruitful than the lawful covenant of Aphrodite and Haephaestus. Who’d fuck Haephaestus anyway, the guy doesn’t even have his own planet. From the illicit union of Mars and Venus sprang several children, some favoring their father, and others their mother. Each, however, represents the fusion of Venusian affection and the Martial impetus toward conflict and action. Because we will be privy to months of Mars and Venus within kissing range, the world is quite likely to see the forces unleashed by their union. So let’s take a look at what we’re in for.

Taking after their father, Phobos and Deimos accompanied their father to war. The boy’s names mean Fear (Phobos) and Dread (Deimos). Their chariots raced ahead of his when he rolled into battle, giving the cowardly heart attacks and wetting tunics far and wide. Although not honored with temples, it was common for Greek warriors to adorn their shields with the fearsome visage of Phobos or Deimos in order to plunge fear into hearts of those who dared stand against them. It is said that Heracles himself wore a shield with Phobos’ awful guise, and that Alexander the Great, before the fateful battle of Guagamela, made sacrifice to the dire brothers. His opponent, the self proclaimed god-king of Persia, Darius, fled from the battlefield, testifying to the efficacy of Alexander’s rites. 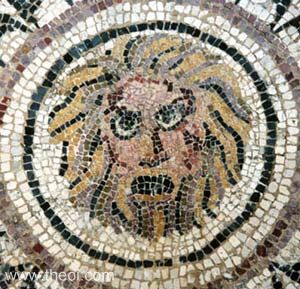 All we have to fear is fear’s bad dreadlocks.

Although they seem mere repetitions of the martial principle, these boys are truly the children of Venus, for it is the emotion and feeling generated by war that they spread. Here the Venusian emphasis on art and aesthetics is turned to warlike pruposes. Fear and Dread are emotions, not actions.  Feelings, not facts.  But once Fear and Dread have been launched into the fray, they have a momentum independent of reality. The smart warrior prayed for their favor, but never let them hold sway over his/her mind. As ole Frank Herbert wrote, Fear is the mindkiller…

On the other hand, Venus and Mars also gave birth to even tempered Harmonia. Favoring her mother, Harmonia’s role was to bring connection to discordant elements. She is a goddess of mediation, of truce. Known as Concordia to the Romans, Harmonia brought exactly what her name implies- harmony and concord. Here separations find common ground, and people learn to coexist without agreement.

In a world which has recently seen differences and disagreements widened by difficult economic times, one can only hope that Harmonia springs as readily from the union of Mars and Venus as her brothers Phobos and Deimos. 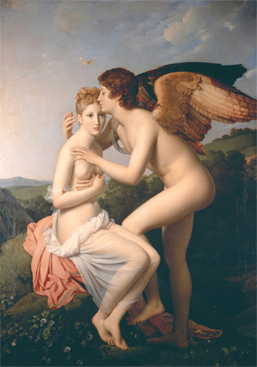 The convergence of Mars and Venus in the modern mind means sex. And in the figure of Eros, this assumption is confirmed. The next couple months should see the heat turned up all round. If you find yourself in the midst of that particular flame, take a moment to remember the divine parents of your small biological union. Its nothing but a Tantric representation of the universe itself, fucking its way through another day. 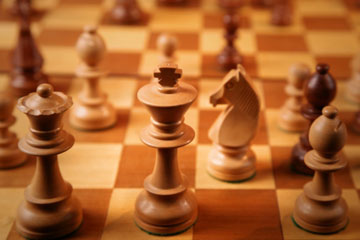 The Strategic Zodiac: A Mandala of Power