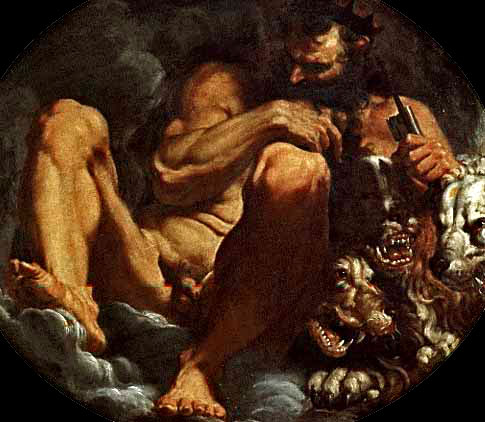 One ominous August evening in the hazy days of ’06, I traveled to the depths of the underworld to get to the bottom of nagging questions about Pluto’s demotion from planetary status.  The following is the transcript of my conversation with Mr. Afterlife himself.

(After being blindfolded and paddled across the River Styx by a way-too-talkative Charon, I was granted an exclusive interview with the original man in black.)

AC: Greetings, Lord Pluto. Big up ya self.

Pluto: Good to see you again. I guess this time I won’t be opposing your Moon.

Pluto: No worries. I’ve had my fun.

(Pluto beckons, and hot dead girls in skimpy outfits serve coffee in hollowed-out skulls. The coffee is black. Of course.)

AC: This is great!

Pluto: No shit. Best in the underworld. Straight out of the Elysian Fields.  They’re just one culture over.

AC: Pluto, I’ve got some serious questions to ask. First, how do you feel about your physical representative losing its planetary status?

Pluto: THE MORTALS PURCHASE THE ILLUSION OF KNOWLEDGE AT THE PRICE OF THEIR SOULS!

Pluto: No, I’m totally kidding. Honestly, I was wondering how long it would take the dirt-monkeys to figure it out. Its a tiny ball of ice and rock, for Jove’s sake! Its not even as big as your goddamn Moon! Of course I’m not offended.

AC: Excellent. Well, people here on earth have been pretty concerned about your reaction to the downgrade.

Pluto: Well A-Train, to be honest with you, they’re going to get my wrath one way or another. But I really don’t view it as a downgrade. If you had a choice, would you rather be the smallest planet or the largest binary icy dwarf planet? Just taste the words “Binary Icy Dwarf Planet.” That’s soooo…metal. Like a pair of battle axe wielding Dwarven berserkers charging an army of trolls to a soundtrack composed by mid-90’s Pantera.  You can’t deny it.

AC: Nor would I. You should beam that into some guitar-playing idiots head.

AC: Nice. Always a pleasure to see a master in action. I have another question: Does this change your relationship with Scorpio? Do you still rule Scorpio? Did you ever? Do you now?

Pluto: As far as Scorpio goes, I don’t know if I ever “Ruled” it in the sense that traditional astrologers use the term. House cusps and all that crap. In the sense that Modern astrologers use the term, meaning that I have a very strong affinity with it, I say yes. Scorpio’s focus on decay, virulence, death, vengeance, violence and obsession has always made it my favorite celestial mansion to spend a few years in.

AC: I hate to belabor the question, but this issue demands explicit clarity- in terms of classical technique, should we consider you to Rule Scorpio?

Pluto: I’ll be straight with you, Scorpio is Mars’ winter home. You see, I really don’t live on this side of the veil, hoss. I just vacation here from time to time. But when I’m here, I like to stay at Mars’ place. You’ve got to love a guy who uses history’s bloodiest battlefields as carpet, and the skulls of heroes for cereal bowls.

AC: Interesting. Anything to say about the rest of the Signs?

Pluto: Well, my mother always told me if you don’t have anything nice to say… I don’t want to gossip. But I will say- Capricorn, its you and me until 2024. Hold onto your oil and watch your ass, kids. Its going to be a bumpy ride.

AC: Sweet. So back to my original question: You really aren’t offended that you’re not going to get so much attention anymore?

Pluto: Not at all. You see, for years people have given me credit for anything and everything underworldy that goes on in their lives, when, to be realistic, the underworld’s just as packed as any heaven. If you’ve been reading your Scientific American, or just browsing wikipedia, youd know that your science-monkeys have discovered another 6 icy dwarves about my size and in my vicinity in the last 10 or so years. And any mythology will reveal that we’ve layers and layers of anti-world to keep organized. We’re well staffed, and I dont mind who knows it.

Pluto: No shit. Just as that miserable little rock is my outpost on the material plane, the other powers have their own transmitters. The astrology meat-bags have given me credit for everything dark and scary that goes in the world, whereas I’m really just the only member of the family you’ve met. If you took a second to think about what it means that I’m in a binary relationship with Charon, you’d understand.

AC: Well, Charon ferries those who approach the underworld across the River Styx. My guess at what you’re getting at is that you’re the modern humans’ re-introduction to the power of the mythological underworld.

Pluto: Austin, you’re so good. I knew there was a reason I haven’t killed you yet.

AC: By your grace, Lord Pluto. I have to ask- now that this whole binary relationship with Charon is out in the open, who takes who in the you know where?

Pluto: Sorry. That was bad.

AC: Moving on. Didn’t you like getting credit for all that underworld action? Doesn’t it make you more powerful to have people thinking you’re responsible? I thought being a god was sort of a “fake it till you make it” type of situation. Belief is food, and whatnot.

Pluto: Not at all. We gods like to be recognized for who we really are, and what we actually do. Just like you monkeys. I’m tired of repping for a whole cosmological sect. We test people to give us the proper respect, and punish those who give us too much, or too little. Its sort of a Greek “Golden Mean” type of deal. Ask Saturn, he’ll explain.

AC: Good to know. Pluto, can you tell us anything about your fellow underworlders?

Pluto: Well, like myself, they’re big on secrecy, but I can tell you a little bit about those who have already revealed themselves. First, we’ve got Orcus, whose job is to punish oath-breakers.

AC: Oath-breakers? We don’t really take oaths these days, except in court.

Pluto: Not the silly kind of oath. The real kind. Orcus’ job is to punish those who forget their destinies and spurn their fate. “The promises to yourself are the most important ones” type of idea. You know, Austin, you kind of look like Orcus.

AC: I have Orcus conjunct Jupiter and the Ascendent by less than a degree.

Pluto: Ha! Damn I’m good. Maybe next time around I’ll be an astrologer.

Pluto: I will. But I’m not doing it because you said so.

Pluto: Anyway. So there’s Orcus, and then there’s Sedna. She’s this sad little Eskimo chick with no fingers.

Pluto: Bet your ass she’s weird. I can’t really tell you much about her, except that she’s always hungry and doesn’t get along too well with her dad. Then there’s Varuna, if thats what he’s calling himself these days. Nice guy, for a cthonian. Indian, good with computers, and ruler of the night-sky. There’s also Ixion, though Marduk knows how he got a base on the material plane. Your histories name him as a son of Ares, strapped to a burning wheel and damned to rotate for eternity for trying to fuck Zeus’ wife. What a dumbass. Only Zeus fucks other people’s wives.

Pluto: Then there’s my sweet little UB 313. Those science monkeys are getting ready to call her Xena.* If they do, they will know my wrath. It’s Proserpina, my wife, not Lucy Lawless. Remember the myth? She stays with me half the year and is gone the other half? Right. Well, look at the dwarf planet’s orbit. You’ll see she saunters around the solar system side by side with me for about half of the time, and goes out on her own the rest. If that isn’t a clue, I don’t know what is.

AC: That’s pretty convincing. But there’s already an asteroid named after her.

Pluto: So blow it up.

Pluto: Good answer. So, we’ve covered Orcus, Varuna, Ixion, Sedna, and my sweet Proserpina.* There’s also Quaor. He doesn’t talk much. He claims to have done the cosmic disco with lady Chaos, and by doing so brought the whole universe into existence. Sort of an Apsu and Tiamat sort of relationship, if you dig.

Pluto: Basically, Charon and I have been the acting diplomats for the underworld for 75 years now, but the graveyard of the solar system is full of tombstones. You call it the Kuiper Belt. Our underworld council is ready to start participating more directly in your daily affairs because it seems like you monkeys need a reminder. You’ll be seeing more of us.

AC: Looking forward to it. Pluto, it’s been most informative, but I really have to get back to my body on the physical plane. I would, however, like to say one thing before I go.

Pluto: Go for it.

Pluto: I totally already knew that.

*Since the time of this interview, UB313/Xena/Proserpina was named “Eris” after the Greek goddess of Strife. 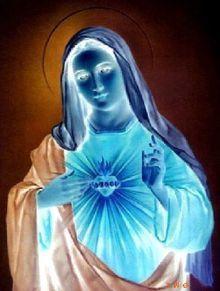 6
Wheel of Misfortune: The Zodiac of Horror 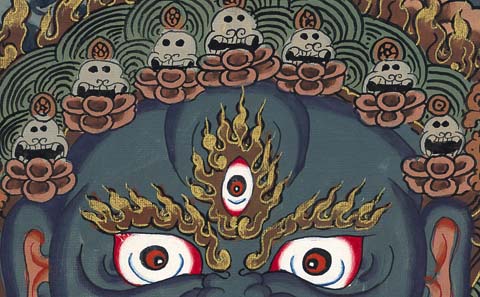