The season’s storms continue, and many get kicked up a notch.  Some walk perilous paths, certain of their purpose, cloaks wrapped tightly around them. Others watch objects of comfort and desire burn, winds carrying away the ashes for a sky burial.  Yet the sky will return what the gale has stolen.

This week is host to the peak of the Mars-Uranus-Pluto T-Square, temporarily transformed into a full on Grand Cross on Tuesday by the Moon’s movement through early Cancer.  Wednesday holds the New Moon in Cancer while Sunday hosts the Sun’s entrance into Leo. All the while, a retrograde and now invisible Mercury considers the hero’s journey, and what clever tricks he can play along the way.

The first half of the week sees the Moon cross through Cancer, triggering a Grand Cross with Uranus, Pluto and Mars.  The plain geometry of the cross hides a host of meanings.

One aspect of the cross is as a symbol of the pain that comes from embracing destiny.  So often crosses coincide with those complicated matters we have no choice but to endure.  What is born of Necessity cannot be disowned without offending the goddess herself.  So for those who are called to heart of the passing storms- give yourself to them.  Don’t do what you think is reasonable- do everything you can.  For the cross is not merely a symbol of pain, but also one of heroism.

Yet not all are called to the cross, and for many of us, there is the option of whether to participate in shitstorms or merely zip up our raincoats.  If you have a choice, I recommend the latter.

In Wednesday’s dead of night, the Moon catches the Sun again, re-seeding the lunar month.  The New Moon in Cancer gathers up yesterday’s craziness and tomorrow’s tensions and asks us to reflect upon them.  There is meaning to gleaned from this season’s dramas, and grand themes beneath its many events.  Distill the essence of what is happening and drink, deeply.

Mercury Retrograde:  Aim For The Heart 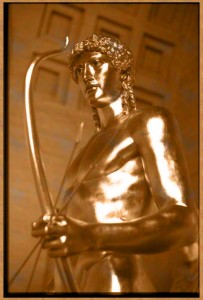 Mercury retrogrades his way throughout the week, disappearing from the evening’s sky for a series of secret meetings within the Sun’s mantle of beams.

Mercury’s time in Leo is a hero’s journey in reverse, a walk backwards, stripping away all but the center, the hero/ine’s beating, deciding heart.  As it aspects different planets along its journey, each will contribute an important piece to this story, adding to the core of the narrative unfolding.

The first of these is with Mars, whose conversation with Mercury will run from Thursday until Saturday, when it is perfected.  This aspect asks us to consider the type of power Mars in Libra symbolize, which is the ability to know when to fight, and when not to.   The sword of truth wielded here sometimes cuts though conflicts, revealing them to be petty and unnecessary.  At other points it strikes hard injustices, situations which cannot, of their own karma, endure.  The difference is knowing what is worth fighting for, and what isn’t.   With drama abundant and factions currently recruiting for crusades large and small, this ability to know the difference makes all the difference.

The Sun Enters Leo: The Order of Thrones 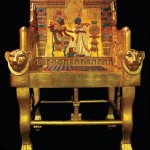 On Sunday the 22nd, the Sun enters Leo, shining a bold light onto the heart of things.  This ingress lends us some strength to retake the center after a week full of pulls from all compass points.  The Sun’s entry into Leo also sees it join a retrograde Mercury, energizing questions about what the new center will look like.   What will we be led by, and who?